ARTICLE FROM THE APRIL 5 EDITION OF THE BROOKLYN DAILY EAGLE Presiding Justice of the Appellate Division, Second Department skates too

After the New York Islanders clinched a playoff spot by beating the Sabres at the Nassau Coliseum on Saturday, lawyers from New York City and Long Island faced off against each other and raised more than $10,000 in a charity hockey match. 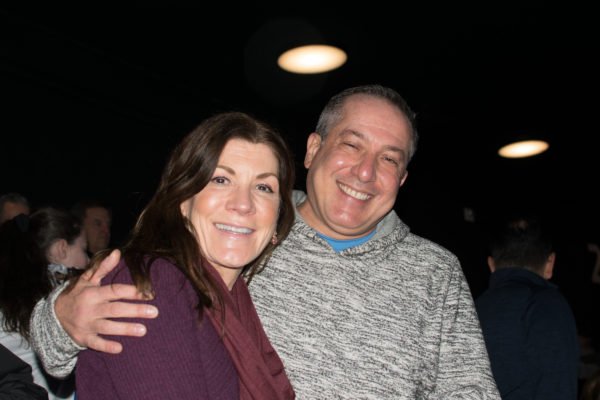 “Joe Carola called me and told me that he was looking to put a charity hockey game together,” Dalli said. “The Coliseum agreed to let us have it here after an Islanders game if we sold a certain amount of tickets. We decided to make it New York City bar attorneys versus Long Island bar attorneys and we got a tremendous response. We ended up having a waiting list of players.”

Dalli and Carola managed to sell 250 tickets. The Islanders donated a portion of the price of each ticket to the Fisher House Foundation, and Dalli and Carola also raised donations from players. Lexitas, formerly Deitz and Barrister Court Reporting, donated money and jerseys for the players to wear. In total, Dalli said, approximately $10,000 was raised. The Long Island team managed to beat the New York City team, but Dalli explained that he was so encouraged by the money raised and the response from the players that he wants to host the event again next year. He said he was thrilled to get such a strong response and was especially happy to have Justice Scheinkman on the ice with him.

“When Justice Angela Iannacci called me and suggested I invite Justice Scheinkman, I thought she meant get him a ticket to the [Islanders] game,” Dalli said. “When she told me he played, I called him right away and he didn’t hesitate to accept.

Players wait for the zamboni to finish cleaning the ice before they start skating. Eagle photo by Rob Abruzzese 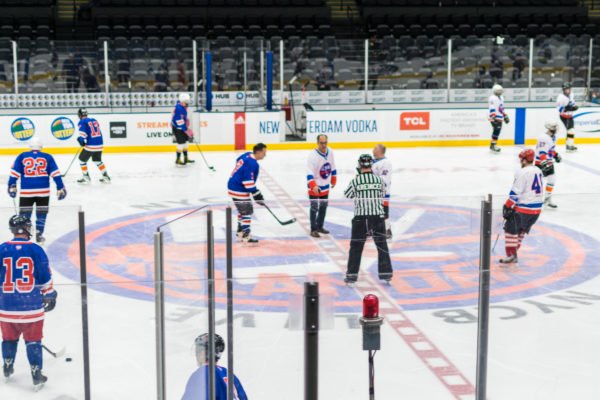 Mark Horowitz dropped the puck before the game. Eagle photo by Rob Abruzzese

“Justice Scheinkman and I did have a fight over the No. 7,” Dalli admitted. “We both idolize Rod Gilbert, but he lost that fight. Since I organized it, I was able to give myself the number.”

Justice Scheinkman grew up playing pond hockey and club hockey in New Rochelle. He explained that playing hockey has become an important part of his routine since he’s become presiding justice. Not something you see the average Appellate Division presiding justice doing. Eagle photo by Rob Abruzzese

“For a couple of years, I was on two teams and played pickup on Saturdays,” said Scheinkman, who has a partial-season ticket package to watch the Rangers. “When I ran for judge in 2006, I stopped for a while because campaigning took up so much of my time.

“When I got the job as presiding judge, I started putting on weight, and I put on more weight than I should have,” Scheinkman said. “I had suits that I couldn’t even wear. When I realized that, I really made a concerted effort to lose weight. Now I try to play once a week. I don’t know how much longer I can do it, but I love the sport. I enjoy the camaraderie with the other players. I love just being out on the ice and I love going to games.”

The judge’s strategy for keeping up with the attorneys? “Stay alive,” he joked. Justice Alan Scheinkman likes to clog the front of the net. Eagle photo by Rob Abruzzese

The hockey match was organized by Dalli and Carola, but Dalli explained that Lisa M. Baldi was instrumental in putting everything together and called her the backbone of the event for coordinating everything with the Islanders and the charity.

The Fisher House Foundation is a charity that provides housing to members of the military and veterans and their families while they are receiving treatment at VA hospitals.

Article and all contents © 2019, Brooklyn Daily Eagle / Everything Brooklyn Media. All Rights Reserved.

All of us at Dalli & Marino, LLP frequently participate in public service, and in philanthropic and charitable activities, in the New York Metro Area (Brooklyn, Manhattan, Long Island, The Bronx, Queens, Staten Island, and Westchester and Rockland Counties). Learn more about our practice by visiting the About Us section of our website, and please contact us at 1-888-465-8790 [Toll-Free], or by completing the form on our Contact Page, to find out about our public service initiatives.